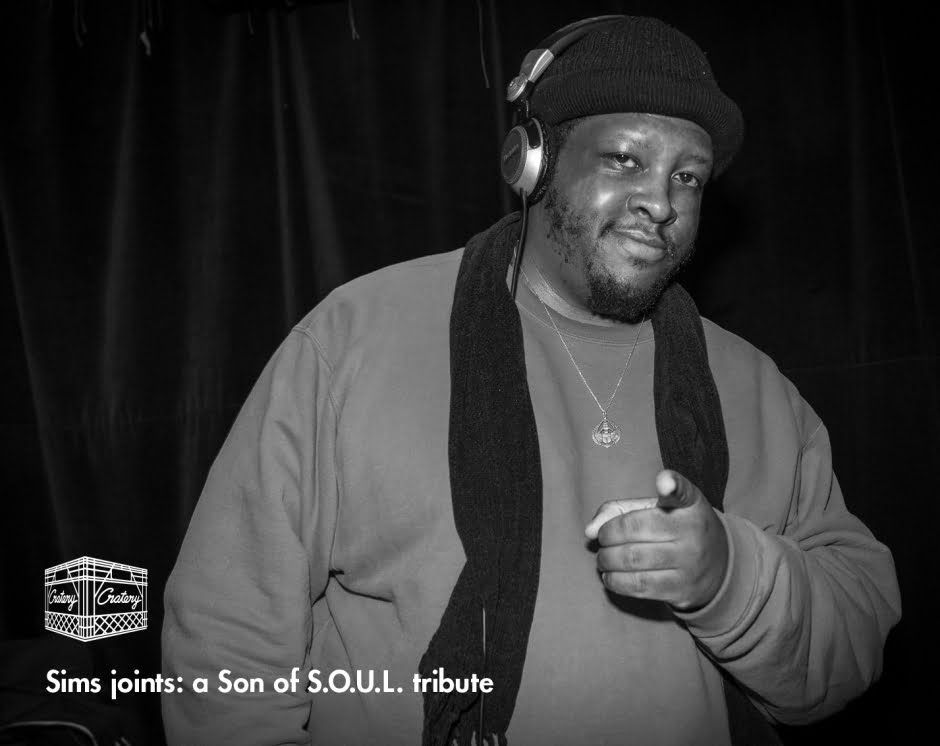 We lost our dear friend Masimba “Son of S.O.U.L.” Kadzirange recently. Needless to say, it’s been pretty rough around Cratery headquarters. We all had our own individual relationships with Masimba. And they could all be described as equal parts meaningful and funny.

An old school philosopher that was seasoned in the lost art of needle dropping.

A friend who would indulge all your corny jokes.

A community staple who could be found supporting countless events throughout the city.

And a genuinely kind soul whose passion for music inspired so many of his peers.

He was so many things to so many people. The list above hardly begins to do him justice. So we decided to get together with our friends from Love Handle (Famous Lee and Alister Johnson) and play some records that reminded us of our friend. It was a way for us to heal and celebrate him at the same time.

Some of them are songs we’ve seen him rinse over and over.

Others had personal meaning. Or are songs we turned him onto.

He would call them “Sims joints” if was still with us.

So we’ll do the same.

Rest well, Masimba. Your spirit lives within us all.

1. Heatwave – Star of a story
This one takes me back to my early days at Lola’s Lounge.  Sims put me onto this around the time Da Beatminerz used it for Smif-N-Wessun’s “Let’s get it on” remix.  My mind was blown before I even heard “Mind blowing decisions.  – Dave Serious

2. Roberta Flack and Donny Hathaway – Back Together Again
This jam is one of those ones that would get him out of his seat and get a thunderous clap of approval, every time.  Made me feel like I really did something right. – Alister

3. Mandrill – Mango Meat
Sims was a regular on my first college radio show “Dusty Fingers” which started back in 1995 on CHRY. This was the first song I ever played on the show. I remember Sims calling in immediately and singing along to the guitar and horn sequence that the Jungle Brothers had lifted, prompting me to do the same. Singing lyrics is one thing. But singing a straight sax solo to a friend over the phone because you love hip-hop that much is some super nerd shit. I loved that we were both nerds. – Arcee

4. Fela Kuti – Water no get enemy
Classic Masimba record. He’d always give us the signature thumbs up when we dropped this until he realized we were only playing it so we had 20 minutes to go out and smoke a joint. –Arcee

5. James Brown – Bring it up
How can one mention the everlasting funkiness of Son Of S.O.U.L without bringing on up The Soul Brother himself? This song reminds me of Sims for the simple fact that it’s the basis for 90’s rap classic, Gang Starr’s “Words I manifest”, and some ish I could easily see him rocking to. The second reason being THE NEEDLE DROP. I’ll explain. Sims wasn’t of one of those cats you’d bump into at a venue, dap up and keep it movin’.. For younger cats such as myself, Sims was a teacher. A humble provider of knowledge for generations to come with jewels and gems. One of these gems was the needle drop. Whenever I would talk with him on the phone during one of our marathon conversations (all his homies know what’s up with this one) he would ask “How are your needle drops coming along? “A couple years back, he put out this video on Facebook of him rocking the needle drop on this classic, and the way he freaked it was crazy. Made me study. Made me want to be better. – Kaewonder

6. Whatnauts – Help is on the way
Essential boogie. I’ve never seen this song not make people want to dance and have a good time. That’s what Sims was all about. – Kaewonder

7. Kinky Foxx – So different
Sims always let me know I had to play this track from the beginning.  One time I mixed it in from 16 bars into the tune, I only did that once. Once. – Alister

8. First love – Party lights
One of my favourite pastimes with Sims was when the two of us would chill out and one up each other with youtube clips of our ‘wantlists’ and recent digs.  When I pulled this one out his eyes lit up and he explained that he had heard this joint years ago and hadn’t been able to find out the title until now.  His ability to remember the time and place of when he had first heard a particular song, contextualizing it in a very specific way that celebrated the city, was incredible.  If he couldn’t remember it, he would literally call someone up right there and then that would, a 20 minute conversation would ensue, and by the end he would have the details of the time, place and particulars, plus a couple of other things to chuckle over. – Famous Lee

9. The Graingers – Shine your light
A true Toronto classic. Just like Masimba. – Kaewonder

10. Alfreda & Billy Ray – Back to love
This is one of my favourite records that reminds me of Masimba.  Sometimes the circle of like-minded heads is small enough that the spread of knowledge comes back around quickly.  Shortly after the postman delivered this to my crib, I rocked it for Kaewonder, and linked him an mp3 version to rock at parties.  Rich Cason is a primarily West Coast producer that had the West Coast pop/lock sound down to a science.  This slice of electro funk soul is one of his rarer productions, and, to hear Kae tell it, had Sims bugging out the first time that he heard it at a regular Tuesday night that Kae spun at.  Of course word of Masimba’s curiousity got back to me, so, during a Love Handle night, when he had his customary spot perched atop a high chair on stage left, I busted it out.  It’s a special thing when you see man’s get out of his chair that quick. – Famous Lee

11. Paul Hardcastle – You’re the one
I think as DJs we take pride in playing songs that get overlooked. This is one of those songs, it’s obvious yet unsuspecting.  Basically you take a monster tune, and turn it on its head and here you go.  That was my motivation when I played this one at the last Love Handle I rocked with Victor Underground.  I remember the tap on the shoulder and Sims’ classic words, “Yo D, what was that?” – Dave Serious

12. Secret Weapon – Must be the music
I remember this song because of that intro. Sims was a sucker for those hard-­to-­catch awkward drum fill intros. In this case it’s kind of an ascending electric piano bounce leading into dance floor dynamite. I took those intros as a deterrent to cut up. He took them as a challenge. A challenge he generally won. –Kaewonder

13. Raydio – Rock on
Masimba was as gregarious and welcoming as one could get when it came to music, but DO NOT get it confused: the man had secret beats for days. I’m talking, labels scrubbed off, obscured and covered to shield these titles from inquisitive and prying eyes. I remember feeling privileged, like part of an inner circle when he finally came up off that song title. I also remember being like: “RAYDIO??” This was one of those joints that he loved cause it had that awkward drum fill intro I was speaking on earlier. Perfect for him to sink his teeth into. Even though I’m extremely saddened by your sudden passing, a grin will cross my face every time I hear the intro to this song. Son Of S.O.U.L Forever. Rock rock on. – Kaewonder

14. Orange Krush – Action
This is just some classic b-boy shit.  Sims and I definitely played our share of b-boy jams together. This takes me back to 416 Graf Expo. Sims would just kill doubles of this shit. – Dave Serious

16. Gaz – Sing Sing
S.O.S. (Sauce) had this joint in his repertoire for years but it was dope when Wu-Tang used it for “It’s yours” and Sims decided to bring it back out.  It was especially dope to hear him cut this up cause the way he used to drop it was off kilter and funky. – Dave Serious

17. Kashif – I just gotta have you (Lover turn me on)
I remember Sims put me on to this record years ago like “You don’t know about this??? Awww man, brothers would love this”. Fucking Kashif! This was a record I’d seen a million times and never copped. Sims would always put me on to that cheap heat!!! I’m saying. He was like the dollar bin whisperer. – Arcee

18. Starpoint – it’s all yours
This one hurts a bit.  One of the true pleasures of the entire digging experience is when you meet like minded souls and link them with joints that you think they might enjoy.  Sometimes this is on some ‘little homey’ type shit, and sometimes it’s something that you know someone might overlook, but regardless it has it’s basis in sharing the knowledge that is a foundation of Dj and digging culture.  Masimba was a giant repository of this knowledge, and one day he texted me out of the blue asking if I had this record.  When I didn’t he replied with “It’s all yours” and delivered it the next time that I saw him.  Rest in Power Grandmaster Son of S.O.U.L. FOREVER. – Famous Lee

19. Mac Thornhill – Make life worth living
I played this at Love Handle one time and he came over and asked what it was.  I was fortunate enough to find a double and gave it to him.  I was very happy to be able to share with him in that way, considering the scope of his knowledge. – Alister

20. Pleasure- thoughts of old flames
I was always an MC. I wrote lyrics. Made rap songs. Hosted shows. I bought records to collect classic breaks and find sample ideas but I never considered myself a DJ. Sure I did radio show, but I couldn’t mix or scratch. I’d just let the songs fade and play a drop in between. Sims insisted I play one of his birthday parties but I protested. I thought I’d embarrass myself because I wasn’t Kid Capri. He convinced me to do the early set and I remember dropping this Pleasure joint, which was a favourite of his. That was the first of countless birthday parties of his that I played. He encouraged me to express that side of myself publicly, even though I was nowhere near as skilled as him. He just liked what I played. It was that simple. No judgements. Just love. -Arcee