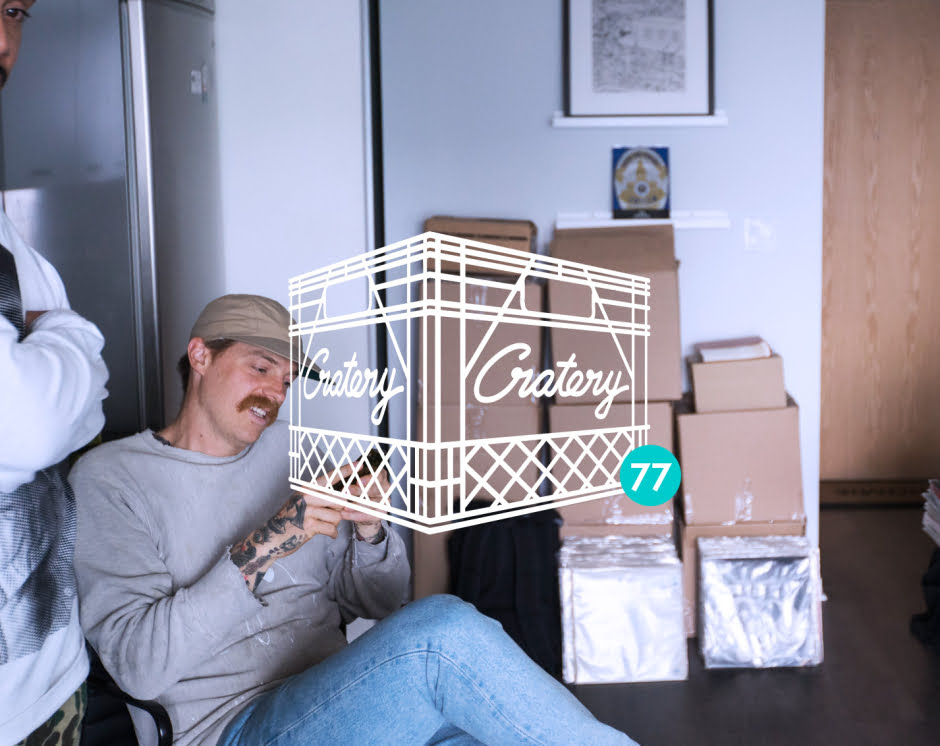 And we’ve been trying to get him on Cratery for a minute.

And he’s acquired some great ones over the years.

He’s also managed to acquire a roster of musicians like Bad Bad Not Good, Ryan Hemsworth, Tommy Kruise and Tennyson under his People’s Champ Management umbrella.

This group of miscreants has not only blessed him with the opportunity to answer endless texts and phone calls but to pay his bills and fund his record habit.

Check out peopleschampmgt.com for more info on said miscreants.

When did you start collecting records? And when do you think you got serious?

Started seriously collecting music when i was really young, like 8 or 9 years old. I tried to buy every rap tape I could get my hands on as it came out, but I didn’t start buying vinyl until it was a bit more available to me around 15. 1994 or so.

Buying rap tapes at 8 is a pretty fucking good start. Where did your love specifically for old soul ballads develop?

Not really sure. I think I always gravitated to stuff that was a bit more melodic and simple, yet really enjoyable. I mean, I love sooo many forms of music and genres, but if I’m at home and just want to put something on and relax, it’s usually some older soul stuff. I listen to music all day everyday for a living now, so if I get a second to listen to something on my own accord, I like familiar, and nothing too challenging.

Care to share any recent finds you’ve been excited about?

Actually something I played in this session, Romeo Taylor’s “When we Made Love”, I found over the winter in Stockholm at Record Mania, shouts out to them, great store and super knowledgeable guys. I didn’t know the record, but fell in love as soon as I put it on. I think that’s another reason I love the genre, there’s just sooo much undiscovered stuff, and small regional pressings I have no idea about. Every day I’m finding out about another title to go after.

When I was in Austin for SXSW last year I spent an extra day entirely at Friends of Sound records and the owner David Haffner put me up on a ton of amazing stuff, a lot of local Texas stuff I wasn’t aware of. That was the best pure record store day I’ve had in years, so thank you David Haffner, And go check out his shop when you’re in Austin. Reminds, me, I still have stuff on hold from him I need to pick up.

How did you get involved with Bad Bad Not Good? Can you talk about their growth as a band?

I got wind of BBNG from the very first video they posted before many people had seen it, and I was blown away. It was the first time in a while I’d seen young kids doing something exciting with jazz and I wanted to find out more. We met a few days before my wedding, I threw their very first show in Toronto, and we’ve been working together ever since. That was like 4 years ago I believe.

Given how young the guys are, have you ever had any generational gap moments? Perhaps a musical reference you made that no one understood?

We were on the road in the van in the early days and they played a Das Racist freestyle over a Cam’rom beat, something classic. I forget which Cam song, but one of the guys said they preferred the DR version to Cam’s rapping. I wanted to pull the van over and let them all out. But hey, we all have different reference points for things, if they’ve taught me anything, it’s not to be the old crappy ‘true school’ rap dude. I’m open minded, young people will always be creating something new. I’d rather be knowing what that is and trying to understand it and enjoy it, then totally tuned out. Life’s too short to put parameters on everything.

I was trying to think back to when I first crossed paths with you and it would have to be when you were working at Goodfoot. From your perspective, what are the biggest differences between record collecting and sneaker collecting? Are there any?

Sneaker collecting is corny as hell, and most people that collect sneakers are the most boring people on earth. I’m joking, kind of. I got into sneakers cause I played basketball, and it just became a bad habit. At least records are connected to arts and culture a bit more? At least that’s what I tell myself. Sneakers bring out the worst in mass consumerism in me.

You’re splitting your time between Toronto and LA these days but you’re originally from Halifax. I know this might be a weird question but what’s the most Halifax thing about you? Or how did growing up in Halifax inform who you are today?

Everything about me is Scotian no matter where I end up. Truro, Nova Scotia to be exact, I’m not even from Halifax. You just get a weird twisted sense of humor and a totally different perspective on life growing up out there. It’s isolated, and people move at a different pace. Probably the most Scotian thing about me is I can still outdrink pretty much any mortal human. Plus DONAIRS.

Any rad digging stories from abroad?

Nothing too crazy, especially these days with discogs and popsike at everyone’s fingertips. I went to Brazil in the mid 90’s in college and found a lot of crazy stuff out there before that really became a thing. I actually came up on a bunch or rare rap shit in a New Zealand coffee shop in Wellington last year, Pudgee ‘Think Big’ test press OG, the first Freestyle Professors 12″ that Showbiz produced on, and a bunch of stuff in that vein, but all mint OG’s for like a buck a pop. I keep finding cool weird bits in Europe and Japan every year, but no like holy grail type things. No Arthur Verocai dollar bin finds or anything like that. I don’t go after the big pieces like you players. I’ve got weird taste, you guys know that. Finding Ganksta N-I-P records gets me jazzed.

[Laughing] That sounds like the Langille I know. Any upcoming projects you’re a part of that you’re excited about?

A couple new projects for 2016 I’m really excited about. One in particular with Truth & Soul records that you guys will be fans of I think.

I also want to publicly proclaim Triple Bron B as the single greatest rap record in the last decade. We’ll all be scratching our heads on that for years to come.