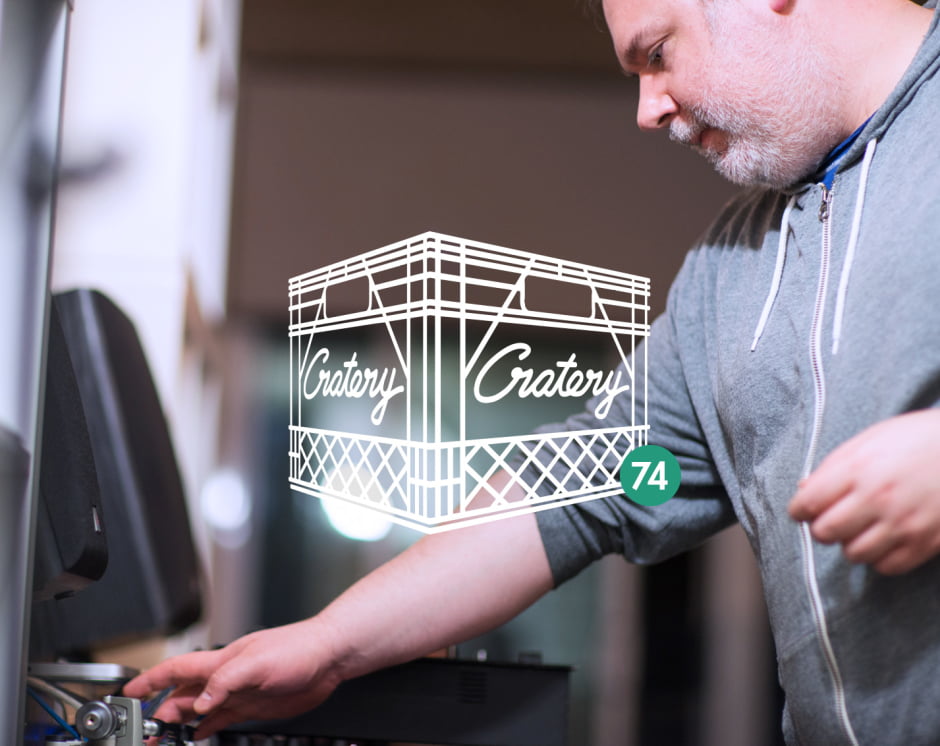 I walked past Yonge-Dundas station sporting baggy jeans and a newly acquired pair of white Adidas Torsions with splashes of fluorescent green and navy blue. I remember cause I had a fluorescent green sweat top and a navy corduroy Gatsby to match.

I used to sport the hat backwards when I was going for the K-Solo “Tell the world my name” look and wear it forwards with the snap off when I switched it up for more of a Master Ace “Take a look around” vibe.

November was hardly new sneaker weather but I didn’t get my first pair of black Tims until December of that year. I walked north past the World’s Biggest Jean store, several currency exchange spots and the flagship HMV and Sam the Record Man locations before arriving at my destination.

I had arrived at Play de record.

It was an auditory feast for an underground music head: a small space in the back of a convenience store stocked full of the latest house, reggae, soca, rare grooves and of course, hip-hop vinyl.

For many, it was also the hottest record shop in Toronto at the time. And one of the guys you could count on seeing behind the counter was Jason Palma.

Palma has been selling records almost as long as I’ve been buying them.

And I say that not just to make Jason feel old.

It’s indicative of how long he’s been putting people on to incredible music.

I remember the day in question because it was a big one in terms of rap releases.

Most folks headed into Play De to buy wax. But I was a cassette man back then and it wasn’t uncommon for an indie store like Play De to get a jump on official tape releases before chains like HMV.

Luckily, there were a still a few copies of the 2 albums we went out there to cop: Tribe’s “Midnight Marauders” and Wu-Tang’s “Enter the 36 chambers”.

I had just started to get more curious about samples so Palma grabbed a couple of comps from off the shelves and started skimming through them on the tables for me.

“You should grab these” he said, handing me a few volumes of the Jazz Dance Classics series on Luv N Haight. “Last 2 copies”. Spoken like a true salesman.

I left that day with the first “break” records that I ever had outside of my Dad’s collection. Yeah, they were reissues but I didn’t give a shit. I had no idea where to get OG Blackbyrds albums, never mind 24 Carat Black. Up until that point I had been sampling mostly off random jazz and soul cassettes I had stolen from the public library.

Palma was directly responsible for a seismic shift in my collecting habits. And he probably didn’t think much of it – it’s what he did for most people every day.

And it’s what he still does for customers, as co-owner of the store he once he used to just work for.

Just recently he upsold me BBNG’s “Velvet/Boogie no.69” single while I was picking up a copy of the new Tuxedo LP at Play De.

He’s still putting me on to joints.

My purchases on that day back in ‘93 turned out to be pretty significant.

Midnight Marauders went on to become my favourite hip-hop album and those comps basically fueled an already budding desire to find original copies of the records featured.

That wouldn’t have happened without Jason Palma.

How did you start collecting rare grooves?

I was always really interested in music since I was little kid. I used to go to Sam The Record Man in Eglinton Square and buy 45s. When I was a teenager I started getting interested in DJing and Hip Hop. I got so excited when I heard an old funk or jazz tune that was sampled in a rap song. I remember hearing James Brown’s “Blind Man Can See It” while watching the movie “Black Caesar” and being blown away that it was sampled for Lord Finesse’s “Funky Technician”. From there on in I just fell in love with the music and had to dig deeper. I credit my good friend Paul E. Lopes who introduced me to artists like Fela Kuti, Donald Byrd and Roy Ayers. I used to listen to him and Malik X religiously on community radio as well.

How long have you been at Play De Record now? Do you have any memories that stand out?

I’ve been at Play De Record for about 20 years, and have been one of the owners for about 10. My favourite moments are Thursdays back in the day when the shipment would come in. I used to watch cats literally fight over the new releases. People were so hungry for the music back in those days. There was a great community feel in the shop in those days. We’re feeling that again these days as more and more young folks start getting interested in buying records.

How has the record store business changed in your opinion? And how has Play De managed to stick around and remain relevant?

We’ve changed tremendously over the last 10 years. We were always very disorganized back in the day. Records were everywhere, piled up high. We’re more organized now and it’s a lot easier to find what you are looking for in the shop. We have also vastly expanded our DJ and production equipment. Probably the biggest thing that has changed is that we’re much more than a DJ shop now. With the digital DJ age we had to expand our vinyl selection to many more genres for cats who just like collecting records. We have much larger rock, jazz, blues and soul sections now. Back in the day it was 90 percent 12” singles for DJs. It’s been a lot of fun meeting new people and broadening our focus musically.

What was your favourite era of Toronto parties and why?

I really love the late nineties and early 2000s when the Movement parties were happening. It seemed like Toronto was really coming into its own and people were really into hearing new sounds, old and new. We were fortunate enough to work with some of the people we really respected and admired from afar like Keb Darge, Gilles Peterson, Jazzanova, Rainer Truby, Egon etc. I also really love the early 90s warehouse parties. Those were my first real taste of underground music.

Any rare pieces you’ve been fortunate enough to find for cheap?

My best find ever was probably the Frank Derrick Experience LP for $1 at the record show in Mississauga years ago. I bought it because he thanks Ahmad Jamal on the back cover I think. I had it for years and then saw it sell on Ebay for around $1000 and was pretty blown away. There was also the time that someone brought in two copies of the St Vincent Latinaires on Soufriere. One was crazy but 2 was insane!

Do you have any collecting pet peeves?

For me, records have always been about collecting music I love. I buy records because I love music. It doesn’t matter to me if it is rare or common. I really hate when cats look down on more common records and try to show off how rare their records are. That really spoils the fun for me.

Share a few recent purchases (new or old) that you’re stoked about.

Just got a copy of the Norman Riley LP on Folkways that I was after for a while. Really nice vocal jazz track on that recently comped on Spiritual Jazz Vol. 6. Also just scored a copy of Ryo Fukui’s “Scenery”. Really great Japanese jazz. I’m also really feeling the new Emanative LP.

Footprints is one of Toronto’s longest running parties. How do you and the guys keep it fresh and interesting for yourselves?

We truly have an amazing crowd that comes out every month for our party, and truly that is what keeps me going. A great mix of music lovers come out to the party. We also get a great set of open minded young B Boys and B Girls who are really into what we play. We also like mixing up the vibe with the odd theme party. Recently we had an all Rare Groove party that was a lot of fun. Played a lot of the classics that made me fall in love with the music in the first place.

Higher Ground is a staple on the College Radio airwaves in Toronto. It’s not easy to maintain a commitment to doing a show, especially for this long. What keeps you motivated?

The music keeps me motivated man! So much great new music to play all the time along with the old school funk, jazz disco, latin etc. I really love playing old school rarities on the show, but I really love finding great new music to play. In my opinion we need to support young cats making great music. I feel I have a great platform to do that. My favourite part about being on air is that I really get to play exactly what I want. The station is behind me 100% and I can play a lot of great music that wouldn’t work on the dancefloor.

Give us 3 dollar bin essentials any new collector could walk away feeling great about.

A very common disco album that had a couple of big hits on it from the late 70s. Forget those and go straight to “Mademoiselle”. Massive rare groove and one of my favourites of all time.

This guy must have made 1000 records in his career! The vast majority are not interesting at all, but this one has a killer upbeat latin funk cut called “Se A Cabo”.

I fell in love with this record many years ago for the incredible “Mace And Grenades”. It’s a heavy jazzy vocal cut with a strong message. Still gets me every time!