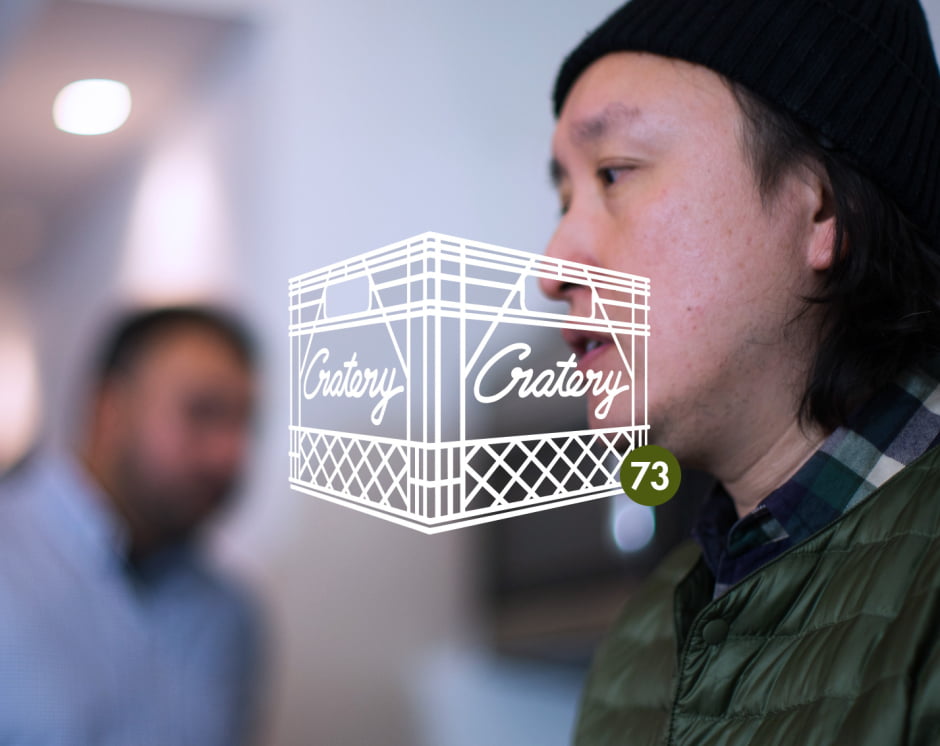 It’s just that he insists they be stored in the refrigerator.

“What is this? Amateur’s hour?” he laughed, taking the bag off the counter and placing it in the fridge.

Plus, you avoid covering your rares in brown fingerprints.

Just one of the gems John dropped on us during his Cratery record.

The others, of course, were in vinyl form. And from all over the world.

It’s a musical palate that’s evolved over the years as a DJ and co-founder of the legendary Movement Collective, to becoming label owner of Do Right Music, purveyor of new soulful, jazzy and funky sounds to the world.

Movement was a group of DJ’s who were united by their incredible vinyl collections.

They threw legendary parties that ran the gamut from Brazilian Jazz to African Funk.

And the people didn’t just dance. They danced to fucking incredible music.

Despite their popularity, the crew disbanded in the early 2000’s to focus on individual aspirations.

Aki Abe opened up a second Cosmos Records location and continues to be one of the top suppliers of rare vinyl around the world.

Nav Sangha went on to start up Wrongbar in Parkdale, revamp the Great Hall and open his new pub, The Bristol.

A Man Called Warwick went on to start the Flipside record show, a popular destination for vinyl nerds across the city.

And John Kong started his own record label called Do Right Music, becoming a champion for local artists inspired by vintage sounds.

But he’s also experienced the vinyl resurgence with the rise of Record Store Day.

He’s seen literally seen his business die and be reborn in the last 10 years.

But through it all, he remains committed to the music.

John continues to give artists like the Souljazz Orchestra, Maylee Todd, Dawn Pemberton, The Soul Motivators and Alister Johnson a platform to be themselves.

He still holds down his weekly residency at Supermarket in Kensington.

And he’s still out there digging for that heat.

Just try and remember to put his Coffee Crisp in the fridge.

When did your interest in collecting vintage records begin?

Some people say they’ve been acting or singing since they were 10 years old. That what buying records is like for me. I picked up Donna Summer’s “Bad Girls”, which in hindsight probably wasn’t the best record for a kid to buy, but it started everything. In the early 90s when hip-hop was sampling jazz and house was sampling disco, the whole vintage collector market opened up to me. I started frequenting second-hand record stores like Vinyl Museum and there was no turning back.

You’ve traded and sold many records over the years. Any that you regret or wish you could get back?

The ‘Aged in Harmony: You Are A Melody’ 7” is one of those records for sure. Keb Darge got me hip to it around 1999, I think. I wish I still had it now because that modern-soul sound is back and I’m missing that cut.  I keep a healthy 2000+ records in my collection, and recycle the rest. One 5×5 Ikea Expedit shelf is good enough for me. Sometimes I do buy back stuff I’ve gotten rid of, though. Lost and found is a good feeling.

Do you remember the first record you spent a sizeable amount of money on?

Ha, not exactly. I overpay for everything these days. Collecting records isn’t about having a bunch of really expensive records in your collection though, it’s more about getting that thing that you really want. And I want a lot of things. If that’s $1 or $100, it makes no difference.

Give us a memorable digging story.

There are probably too many for me to zoom in on one particular moment. Collecting records has been a part of my life for so many years now that it’s incorporated into my day. I can be going down the street for lunch and I just pop into June Records or Cosmos Records and take a flip. The same goes for when I’m on the road: if I’m in London or Tokyo, my dealer friends there know the kind of stuff I’m looking for, which is a pretty wide variety, so I just decide whether I want to pay their asking price. I get my hands less dirty these days but I pay the price, I guess.

There was the time Keb Darge flying in with a box of 7’s worth the downpayment on a house. Or when Warwick, Nav, Aki, Jason Palma, and I convinced Gilles Peterson to DJ out of our crates when his records didn’t arrive on the plane. Musically, we could play whatever we wanted to a receptive audience without any sort of limitation. When was the last time they put anyone on the cover of NOW Magazine for playing jazz records?
Collecting has changed significantly since you started buying records. What do you miss about record shopping?

Back then, information was everything. You had to know a lot of people or spend a lot of money to get that information. It’s a good thing that people can just log on to Discogs and find amazing stuff, but there’s a certain human element lacking that was a big part of the community in those days. There are surprises today though. Labels like Numero or Awesome Tapes From Africa still put out music that nobody has ever heard before. The unearthing process is just different.

What motivated you to start Do Right Music?

Music is the bottom line. Back when we launched in 2002, it was much more difficult to reach out to fans than it is today. There was an online community but the industry wasn’t anywhere near as savvy as it is today, with tools like Bandcamp and Soundcloud and everything else. I was DJing in Europe a lot and people would want to know what was happening in Canada. Indie rock was what people associated with Canadian music at the time, so I decided to feature some great Canadian soul, funk, and jazz to show that we have other faces here. It’s pretty much the same mandate today. I just want to get behind the stuff that I believe in; it’s a personal venture as much as it’s a business of music.

What are the biggest challenges in running an independent label in 2015?

We still rely on physical sales more than anything else. Japan and France are our biggest markets, but the North American musical landscape supports digital consumption first. The biggest challenge is striking a balance between catering to digital music trends versus the physical market that has served us so well for so many years. At the end of the day, we have a responsibility to stay on top of the game to figure out the best way to support our artists and the label.

You’ve seen the vinyl market go to shit and you’ve also seen it come back to life. What are your thoughts on the so-called “vinyl resurgence”?

We operate in a niche market where people collect our records, so we’ve always been pressing regardless of larger trends. I hope the passion for vinyl stays at the level it currently is, but it’s become quite a bit more difficult to get records out there these days. The demand on labels and artists to press and the rush to get a piece of pie has really slowed down production. As a result, our production schedule from last year has been regularly delayed because everyone is rushing to press Record Store Day titles, or whatever limited flavour of the week larger labels are pushing. It’s great that people want wax, though.

Talk to us a little about a few of the Do Right projects we can look forward to this year.

We’re really excited about launching Do Right Japan with four releases specifically for the territory. On the home front, we are about to release The Cookers Quintet’s “Vol. Two”, The Soul Motivators’ “Free To Believe”, and an upcoming album from Cratery regular Alister Johnson. Musically, we’re sticking to the label’s roots and keeping true to what Do Right has always done.

One Response to CRATERY 73: John Kong