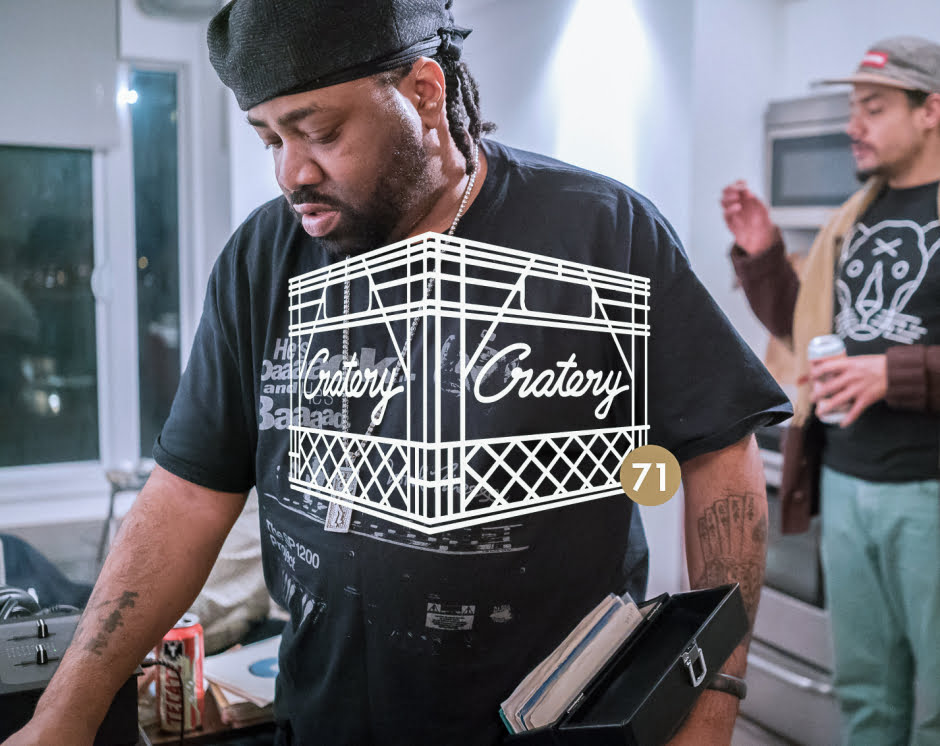 The first time I went record shopping with Lord Finesse I had an epiphany.

How is that not a trip?

I’m a kid from the suburbs of Toronto who used to blast “Keep the crowd listening” on my walkman trying to catch a bus from Square One to Kipling on my weekly downtown tape run in the early 90’s.

I never went to church but I grew up on the Lord’s music.

So driving to record stores with Robert Hall in the passenger seat is always gonna feel a little bugged out.

It’s not like this guy discovered Big L, made beats for Biggie or put Showbiz and AG together.

A few years back I was driving him back to the hotel after a day of digging and I had my Cool J playlist banging.

Me and this guy Finesse start singing every word.

Back and forth. Both verses.

That was a great day.

But pretty much any day involving a private rap karaoke session with Lord Finesse singing LL album cuts in your car is a great day.

More recently, I was lucky enough to have both the underboss himself and DITC co-founder Diamond D spin at my 40th birthday party.

The bonus was convincing Finesse to bring a few pieces of choice vinyl out from the safety of his Bronx stronghold to record a Cratery with us.

He more than obliged, with a potent stash of soul heaters that prompted us to follow that same theme for most of the episode.

I later upped the nerdery quota when I picked the Funky Man’s brain on a series of vinyl related topics.

On when he started to first shop for records seriously:

That was about ’91 ’92. I was already watching Diamond and Show do their thing. They were digging way before that. They use to schedule trips out of the city. I was too busy chasing women back then. But then I started hanging out with Buck(wild) and he would be hitting all kinds of spots, from record conventions to hole in the walls. I was already dj-ing, so I was up on a lot of classic breaks. Like for example, take Bob James “Nautilus”. I’m up on that, so now let me start going deeper. Now I’m looking for other Bob James albums and other releases on labels like CTI and Blue Note. Then I start reading the credits on the back of these albums and seeing names like Bernard Purdie and Idris Muhammad (RIP). You start recognizing which artists got the tightest grooves and then start buying their albums and so on. Now add the fact that my crew was already deep in the digging game. They were putting me on to a lot of records back then so I was getting a lot of knowledge.

On competing for vinyl with his fellow DITC members:

Of course we were all competitive. But we all hipped each other to shit. If it’s drums, we’re all gonna have certain breakbeats. Everyone was after Skull Snaps at one point. Everyone was after Power of Zeus. Everyone was after Brethren. Even the “If” drums. But when you got 4 people in the crew digging, everyone is gonna bring something different to the table. We might be into different shit at different times. I was into jazz for a while. Show and Buck might be into psych rock. Then I might switch it up, start getting into soundtracks. But let me say this: digging with Buck could be discouraging man. He would come up on crazy titles. And not just one copy. Like 6, 7 copies of shit. Les De Merle? I got a sealed copy of that from Buck. The Dorothy Ashby joint with the rug on it? Got a sealed copy of that from Buck too. He had mad copies of that.

On his most memorable digging trip:

Japan. Like ’93-94. It was me, Big L, Show and AG, Organized Konfusion and Roc Raida was dj-ing. That was the first time I met Muro. First tattoo I ever got. First time on the bullet train. First for a lot of things. Looking back, that was a crazy trip.

On maturing as a producer and a digger:

I listen to records for different things now. Not just for loops no more. I listen to the chords and the instruments being used. I used to analyze records in one particular way, but now with software, you can analyze a record 20 different ways. Listening to all these records broadens your horizons. When you think about different instruments, you can pull out different artists. Let’s say you want something with vibes. You got Cal Tjader. You got Roy Ayers. You got Milt Jackson. Even though they play the same instrument, they’re all different. I understand the differences cause I’ve been listening to these records for a long time. Different artists are going to point you in different directions musically. And it doesn’t always mean sampling, it might just mean listening.

On his favourite places to dig in the world:

Hmmm… I would say Japan for sure. You see a lot of U.S. records that you would never see here anymore. A lot of rare stuff that they scooped up from the States. But Europe is wild too. There are a lot of good European records that are common over there that you don’t really see over here. But Japan also has its own Japanese artists with Japanese breaks that covered a lot of US artists.

On personal unreleased productions he felt strongly about:

The most prime example of that was “Come on”, the Biggie record. That was recorded during Ready to Die. Then it was remixed for the Born Again album by Clark Kent. So the original one I did never came out officially. Would have been nice to have that one on the discography.

On his favourite DITC productions:

Diamond D:
I’mma say that Alkaholiks remix for “Next Level”. That was different than the other Diamond stuff that was out at the time. That one stuck out to me.

Buckwild:
It’s a tie. I gotta say “Masta IC” Mic Geronimo”. How he put it together that was just abstract – from the drums to the loop. But I love how he hooked up that Organized Konfusion joint “Why” too. So I gotta mention that.

On the potential for an upcoming Lord Finesse album:

Hopefully later this year. Maybe Fall/Winter. I’m not a summer dude. I want everyone locked in the house listening. I done went through beats. I got like 4 joints solidified. But I don’t think I’ve done my best work yet. I’m just developing a sound right now. I’m taking my time. I don’t care about clubs, radio, I just care about making something that can compete.

Here then, is our Cratery episode with the one and only Lord Finesse.

Attention wetmouths: tracklist unlisted at the request of the Funky Man himself.