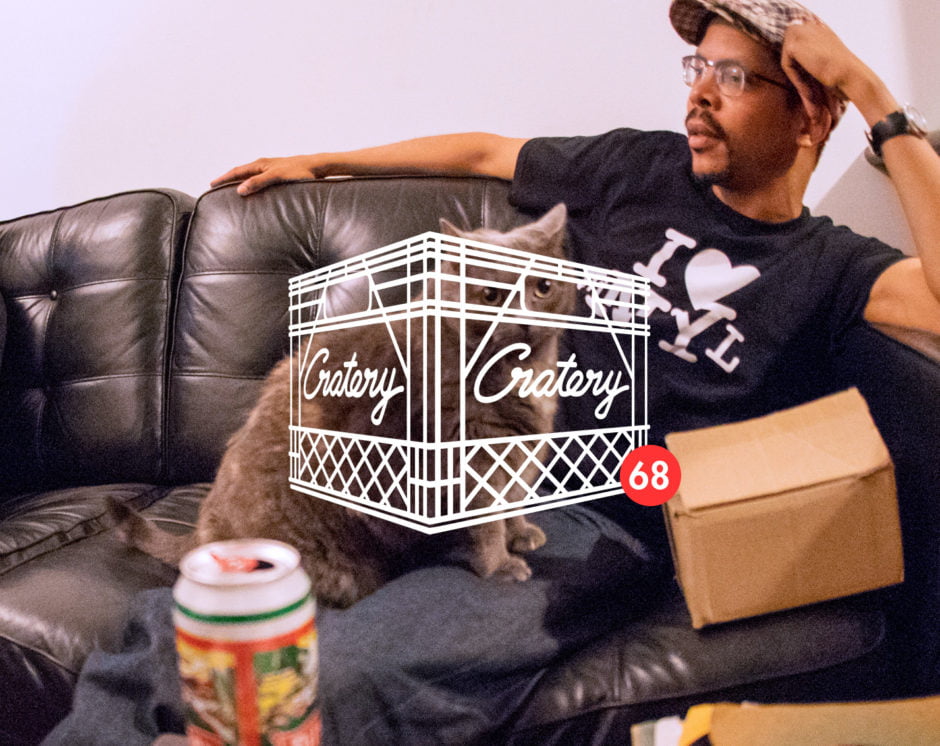 You might use all of the above to describe Amir Abdullah of 180 Proof Records.

But at his core, he’s really just a dude that loves music.

Coincidentally, our favourite kind of dude.

So it was a no-brainer to hang out and play records at Cratery Headquaters while he was in town a few months back.

I first became familiar with Abdullah as 1/2 of Kon and Amir, creators of the seminal “On Track” breaks mixtape series which hit shelves in the late 90’s.

Cats like DJ Shame of the Vinyl Reanimators and Mr. Supreme of the Conmen (along with Jake One) were already part of a small group raising awareness about the incredible array of rare soul, funk, jazz and rock records that were providing the foundation for 90’s hip-hop.

The Internet was very much in its infancy at this time.

No YouTube. No Soul Strut. And definitely no Who Sampled.

Mixtapes like “On Track” were being dubbed and passed around the country not only as entertainment, but information.

The distribution of these tapes helped connect a community of like-minded individuals that everyone now refers to as crate diggers: guys who had grown up on hip-hop, but had developed a taste for old records through the art of sampling.

But Amir’s ears were far too sophisticated to be pigeon-holed to hip-hop breaks.

So he went deeper.

He fell in love with Latin, Brazilian, African and other funky sounds from around the world. Along with partner Kon and DJ Muro, they dropped the incredible “Kings of Diggin” compilation on BBE in 2006 and followed suit with a new spin on their original mixtape series called “Off Track.”

It’s now been over 20 years since Amir Abdullah left Boston and began his journey in NYC as a DJ and record collector.

In 2013, he added label proprietor to his list of titles when he started 180 Proof records.

His first order of business has been to reissue the small but celebrated catalog of Detroit jazz label Strata records.

And it hasn’t been easy.

Mainly because doing anything right costs money. And Amir isn’t a trust fund kid with a hobby that his Daddy pays for.

Collectors might be willing to pay a premium for a premium product. But financing one has its challenges.

So Amir embarked on a recent Indiegogo campaign to try and raise some funds for his burgeoning label. And though they didn’t reach their intended goal, they still lived to fight another day.

As Little Brother appropriately stated back in 2007: “Dreams don’t keep the lights on.”

But despite the financial realities, 180 Proof is still very much a labour of love.

It’s allowed Abdullah to do things like officially release Kenny Cox’s “Clap! Clap! The Joyful Noise” to the public.

The record, previously only featured as a ‘coming soon’ photo on the back of a few Strata releases in the 70’s, has finally been made officially available thanks to Amir’s hard work.

The same can be said for his latest release, an unreleased gem from Strata artist Maulawi called “Orotunds” that features covers of Maiden Voyage and People make the world go round.

With everything he has on the go, we were thrilled to get some time to hang out with Amir while he was in Toronto.

And he didn’t disappoint.

Armed with a stack of 45’s full of heat we’d never heard like Lady Margaret and Perry Smith’s “Out in space” and Larry “T-Byrd” Gordon’s “Contact off funk”, Mr. Abdullah reminds us that he’s not new to this digging thing.

Now go forth and indulge in the audio greatness of Cratery 68.

Like the tagline used by our friends at 180 Proof, it’s music for the people.