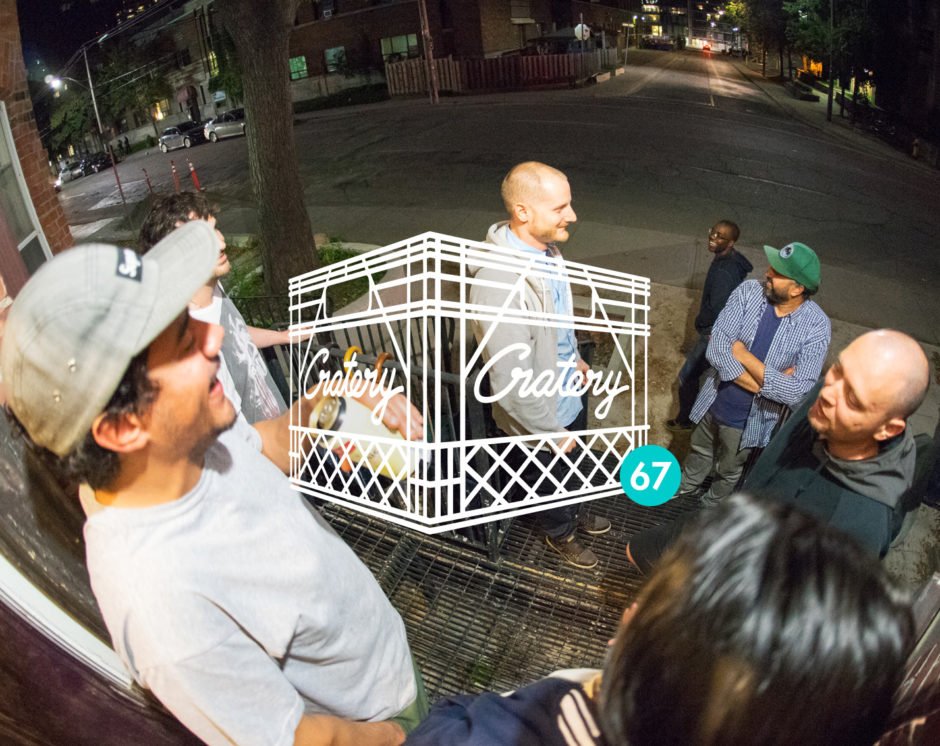 Our dude Jake One happened to be in town for a beat battle a few months back, so it was only right for us to record another episode of Cratery.

Jake first appeared on our 22nd episode back in October 2010.

This time, he was armed with a small box of 45’s, primarily sweet soul and boogie.

It was a good night.

Kaeweezy on the grill. Serious behind the lens.
A supporting cast of Mr. Attic, MoSS, Frank Dukes and Marco Polo.
And the sweet smell of barbecue and marijuana wafting through the air.

Customary with any Jake episode, no track list will be provided. You guys don’t need to know everything all the time. Just enjoy the music.

We did, however, sit down with Seattle’s finest to pick his brain on a variety of random subjects.

The results? Perhaps the realest Jake One interview ever.

Peep the audio for Cratery 67 below.

Why he still buys vinyl:
“It’s partly a baseball card collector type mentality. And then there are records I still buy just to chop up. I still like the feel of going through records for samples better than mp3’s. But honestly, it’s mostly the collector side. Just certain things I need to put on my wall. Like I recently got this record by this group Joy called “The time is now”. My man had it and I had to cop it. I’m not gonna DJ with it. I’m not gonna sample it. That shit is just going on the wall.”

His latest collecting obsession:
“My new thing is vintage 2-inch reels. The most recent one I got is a Bar-Kays reel from one of their Mercury albums. It’s dope cause they come with the original tracksheets. Shit is like a straight artifact, on top of getting all the sounds separated. Timex Social Club’s “Rumours”. That’s another one I just picked up. But I really can’t disclose too much you know? Multitrack Illuminati. You guys can have your little records.”

The new music he’s fucking with:
“Hasn’t been a crazy year to be honest. But I really like the intro on Ty Dolla Sign’s new mixtape. Almost sounds like some futuristic Dilla like shit. Few joints on the YG album. That shit on the Jeezy album with the Cortex sample. But mainly I’m waiting on the next white dude to sound exactly like a classic 90’s rapper. Like maybe there’s a white version of Jeru just waiting to be discovered.”

The forthcoming full-length Tuxedo project with Mayer Hawthorne:
“It’s probably my favourite thing that I’ve ever worked on. I’m excited for everyone to hear it. We’ve officially signed a deal and you guys are gonna have some records real soon. That’s pretty much all I can say at this point.”

His latest production pet peeve:
“Soundcloud remixes in general. Dudes are just getting out of hand with it. Like do I really need to hear your random ass Whitney Houston re-edit? I don’t know man. It seems like cats are trying a little too hard to jump on that Kaytranada/Cashmere Cat wave. Shout out to my lil homie Swish, he got a few that are actually good though.”

His fascination with gospel records:
“I’ve buying gospel records since the early 2000’s, but a lot of it was basic stuff on labels like ABC. I guess it kinda got real on this one trip to Detroit. The gospel section in one of the stores was just huge. Seattle has some gospel, but not like that. The community for that is much larger in the D, and there were mad private press joints you just didn’t see. So I started taking hella gambles. The thing with gospel is that it can go either way: you might get some one mic organ crap or you might come up on some boogie sounding shit. Lately I’ve been into some 90’s stuff which sounds like some straight DeVante Swing music, except it was made for the Lord.”

His ongoing connection to the city of Toronto:
“The first person I met from out there was MoSS. I was at this record store called Bop Street in Seattle and my homie Luke was working. MoSS called the store while I was in there, asking for all these records, trying to set up mail orders to Toronto. This had to be around ’95. Luke connected us since we were looking for the same stuff. I started selling him joints like Bob James “Two”. You know, some basic ass shit these Canucks couldn’t find back then (laughs). But on the real, we just started building. Eventually MoSS introduced me to Arcee and Mr. Attic (Da Grassroots), and I started coming out to Toronto pretty frequently around ’97 to hang out, and those guys would come out here. Hell, I wouldn’t even been using the ASR if it wasn’t for Attic. Like the way he had that “Drama” record sounding? I wanted that sound. I got the ASR cause Attic was fucking with the EPS. That’s my guy. Today of course, there’s the Drake thing. Kicking with that dude out there was a definitely an experience. But what makes it crazier is years before that, I was out there working with dudes like Brass Munk and Kardinal. And I did the Red Bull thing out there for a bit too. Shout out to the lil homie Frank Dukes. I got my folks in Toronto for sure.”

His Cratery confession:
“I made a few beats off Cratery. One in particular turned out really dope. It’s definitely a slap. You guys had a few episodes with a couple things I had to jack.”

On avoiding old head syndrome:
“That’s the hardest thing in the world. But I honestly love what the younger generation is doing. I just try to keep what makes me good, but learn from what the younger guys are bringing to the table. Being an old head complaining on Facebook about the state of hip-hop is just not a good look. 20 years from now, the new kids will be reminiscing about how Soulja Boy was the man. It’s all relative to your generation. I just can’t go out like the Chi-Lites making struggle records in ’89.”

His thoughts on his hometown Super Bowl champion Seattle Seahawks:
“Just stay the course and you’ll be rewarded. To spend almost 30 years watching a team not be successful, and finally we win so dominantly? That’s the best feeling. And the victory felt better cause it felt like Seattle was on. Macklemore becoming the biggest thing in music had Seattle popping and then we win Super Bowl? It just felt good for the city not be purely on some hate shit for once (laughs).”

Why his homie Chan Dogg is integral to the fibre of the music industry:
“Chan Dogg is just a major factor in the game, man. There aren’t too many people that can tell you about Stevie Ray Vaughn guitar solos and James Mason album cuts. Plus he’s a got pretty decent collection of jazz records on Prestige that continues to grow in 2014. He’s definitely keeping it youthful at 50.”

3 Responses to CRATERY 67: Jake One