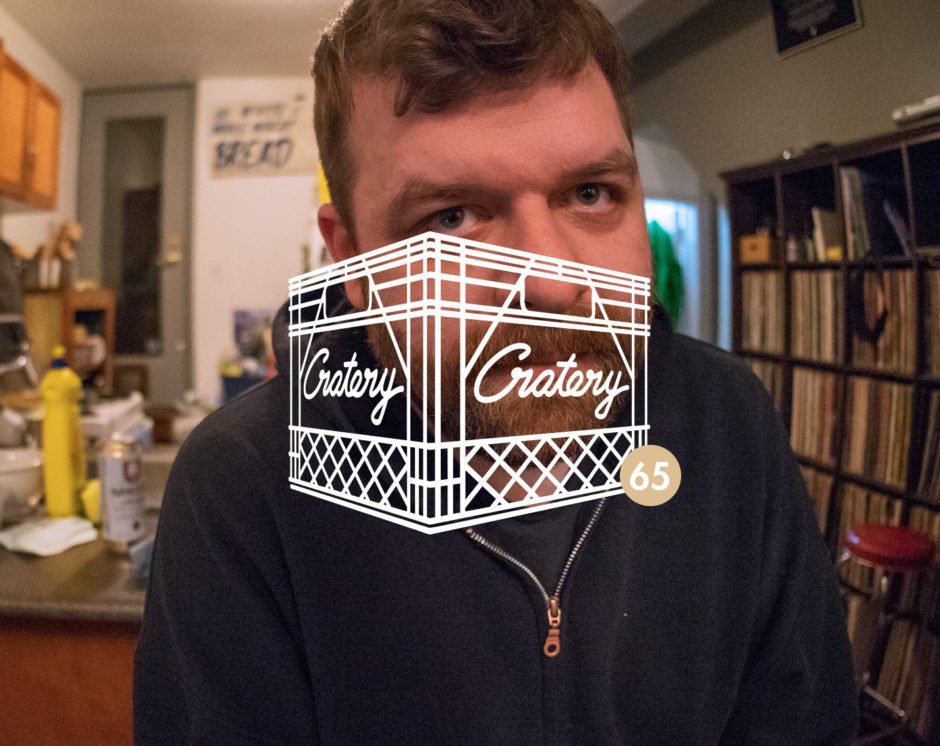 Like many of us who’ve spent our lives loving music, this months’ guest Birdapres is a bit of a renaissance man. Rapper and producer. Collector and dealer. Radio personality and record store employee. He’s called places like Victoria, Vancouver, Toronto and most recently, Winnipeg home. But these are the things I already knew about Bird when we recorded our first Cratery episode together.

I needed some additional facts for this month’s write-up.

So how would I learn more about a friend who lives in a different town?

Well, there’s this thing called a phone call. After much contemplation, I decided to try it. It was a very different experience from texting. It allowed us to have something called a ‘conversation’ which felt strangely familiar.

During this aforementioned ‘conversation’, I learned a few things about Bird.

1. Someone’s Dad schooled him on sampling.

“I was listening to BDP’s ‘My Philosophy’ with a friend when his Dad walked in. He started laughing when he heard the song. He pulled out a copy of Stanley Turrentine’s “Cherry” from his own collection and proceeded to blow my mind.”

“Kilo did a well-loved radio show called the Krispy Bisket with the Incredible Ease (RIP) and this dude named Mr. Bill. Kilo was working at this spot on Hastings called Rhythm Zone. I was on a class field trip and wandered into the store and saw the Check the Rhime 12” on the wall, I’ll never forget it. Kilo was cutting up some UBB record (Ultimate Breaks and Beats for the uninitiated) and I walked up to him and asked him what it was. That was the first time someone told me about ‘breakbeats’.”

3. The first record he bought was Prince’s ‘Purple Rain’.

“I bought that with my allowance money. If the first record you buy informs your tastes, then this certainly helped steer my love for 80’s R&B, hip-hop and eventually funk and soul. But let’s be real. It was like ’84-85. I was a fan of Twisted Sister and Tina Turner long before I was a fan of psych or rare grooves.”

4. The first joint he was really geeked on finding was the London Experimental Jazz Quartet.

“I found that at the Vancouver Flea Market around ’95 for $10. Records were so cheap back then, I actually felt like I got burnt at that price. I also found a copy of Thesda’s ‘Spaced Out’ years later while I was on tour in London. It’s strange how diggers can kind of discover a record around the same time. Shortly after I found mine, a frenzy ensued for that joint. I don’t know what it is about London, Ontario.”

5. Apparently the ‘Scavenger Economy’ is a real thing.

“It’s a phrase my boss used to describe jobs that rely on digging through other people’s garbage and flipping it to make a living. To be honest, it’s not favourable. I’d rather not have to sell records to get some extra coin. I’d rather keep them. But sometimes you gotta do what you gotta do.”

6. He considers our own DJ Serious a huge influence.

“DJ Serious was very generous with his knowledge when I moved to Toronto for a short time in ’97 (along with Planet Pea). Serious was the first person to tell me about Wayne McGhie and the sounds of Joy. The Internet was still in its infancy then. It would be 3 years before I even heard that record. And 10 years before I found my own copy.”

7. There isn’t much to say about this month’s UNLISTED joint.

“It’s not very well documented. It’s Canadian, that’s pretty much all I know.”

8. He figured out the importance of buying local, early.

“I guess I thought if James Brown was popular in Canada, that there must have been Canadian funk and soul artists that were creating that sort of music up here. These theoretical records that may or may not exist. Eventually you figure out that there are some pretty cool records in your own backyard if you’re open to digging and not just chasing grails. My personal favourites? Sonny Greenwich “Son Song”, Patrick Godfrey “Ancient Ships”, Bob McMullin “McMullin’s shorts” and Walter Zuber Armstrong “Alpha and Omega”.  Plus a few I won’t mention for fear of reprisal from Sipreano.”

“I think it’s fantastic. I recently started investigating Italian Jazz labels like Soul Note and Horo and it’s great to be able to go through the catalog online and listen to stuff and figure out what you’re actually into. It’s a great resource for learning. Then again, you can’t deny the satisfaction of youtubing a record you’ve just found only to find that a video for it doesn’t exist. That’s a great feeling. I’m always going to have a thing for records few people know or even care about.”

10. He’s not exactly thrilled about the media-fueled vinyl resurgence.

“People are out here literally buying Led Zeppelin and The Doors and calling it a day. They’re not exactly exploring anything new. So it’s not really an affirmation of what we do as collectors. My interest is in interesting records. I actually hate more records than I like. I hate 98% of them. If someone was to burn a pile of garbage records, I wouldn’t stop them. I’m not into records in general. I’m into records I like.”

You can check out Bird’s radio show “Constant Elevation” with Steve St. Louis and David Haynes at UMFM.com. It’s live in Winnipeg every Saturday from 4-6 pm.

And peep his latest album “If and only if” with Grey Jay. It’s available for download at marathonofdope.com.