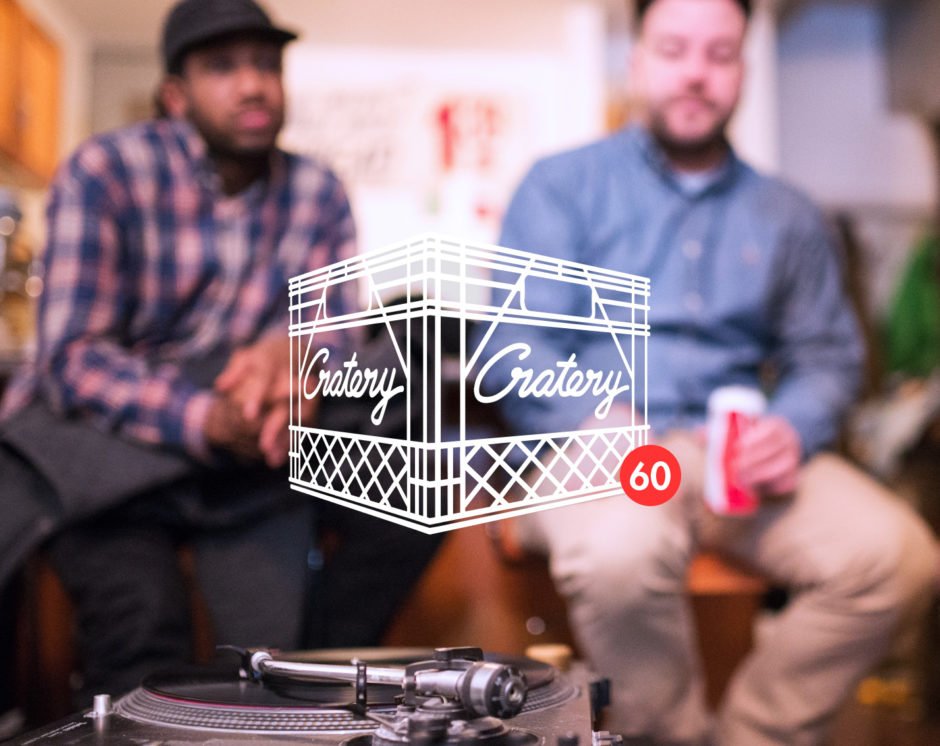 Just like that, it’s been 5 years. I can’t fucking believe it. When Kaewonder and I started this podcast in January of 2009 it wasn’t even its own brand yet – it was still under the Real Frequency umbrella – a monthly bonus for fans of my former hip hop radio show with Musiklee Inzane, P-Plus and Keezy. Quietly, Cratery began to take on a life of its own.  By the end of our first year, we had appearances from Mr. Attic, Skratch Bastid and DJ Serious, and the attendees at every Cratery recording session were growing.

By our 2nd year, we knew we had something special. DJ Serious started hanging out at every session and eventually became our official photographer – he was the first to create a visual vibe and energy around Cratery. By our 15th episode, my friend Sean Davison would create the Cratery logo and the artwork that would define the look of our podcast moving forward. And by the end of 2010, we’d add record heads like Sipreano, Jake One, Jason Palma, Frank Dukes, Alister Johnson and Murr to our list of esteemed guests.

By 2011, Serious was an official member of the Cratery team. He gave life to the Cratery website and for the first time, we finally felt like we were building a brand. Over the next 2 years, we’d create even more content, including “The Seventh” (our monthly featured 45) and our cover song spotlight: “Version”. We’d also add another 24 episodes with some of our favourite vinyl nerds – House Shoes, Aki Abe of Cosmos records, MoSS (producer and proprietor of reissue label of Strawberry Rain), FamousLee, Big Jacks and Bozack Morris.

The hommie Mike “Mantis” Deyman joins us for our final episode of this year and he definitely honoured the Cratery tradition by pulling a nice crop of that killer shit, thun. The Lyman Woodard Organization, The Thompsons, Family Circle, Mad Cliff and Weldon Irvine aren’t the easiest artists to source original copies of – but Mantis is no stranger to the rare record game as an employee of Cosmos Records here in Toronto. You can catch him dipping into his rare soul stash at The Red Light on the last Thursday of every month for Work it out with Cratery alumni FamousLee.

We enter our 6th year with excitement. To date, we’ve delivered well over 70 hours of vintage soul, funk, jazz and psychedelic sounds from our personal collections, with almost no end in sight. Think about that for a sec: OVER 70 HOURS. This year, we’re adding even more pieces to the puzzle.  Look for more episodes, the return of The Seventh, Version and perhaps even a few new, unexpected pieces of content to emerge on cratery.com.  Thanks for riding with us so far. But this is no time to get out of the car.

In 2014, Cratery will continue to be home to the vinyl nerd. A place where folks like us can obsess over the bullshit that defines our lives. A place where things like ringwear, seam splits and surface noise are discussed seriously and in jest, but always without judgement. A place where the weed is rolled as tightly as a double gatefold LP in an outer sleeve. But most of all, it’s a place where friends hang the fuck out and fuel their obsession for music. If you’re like anything like me, you wouldn’t want to be anywhere else.