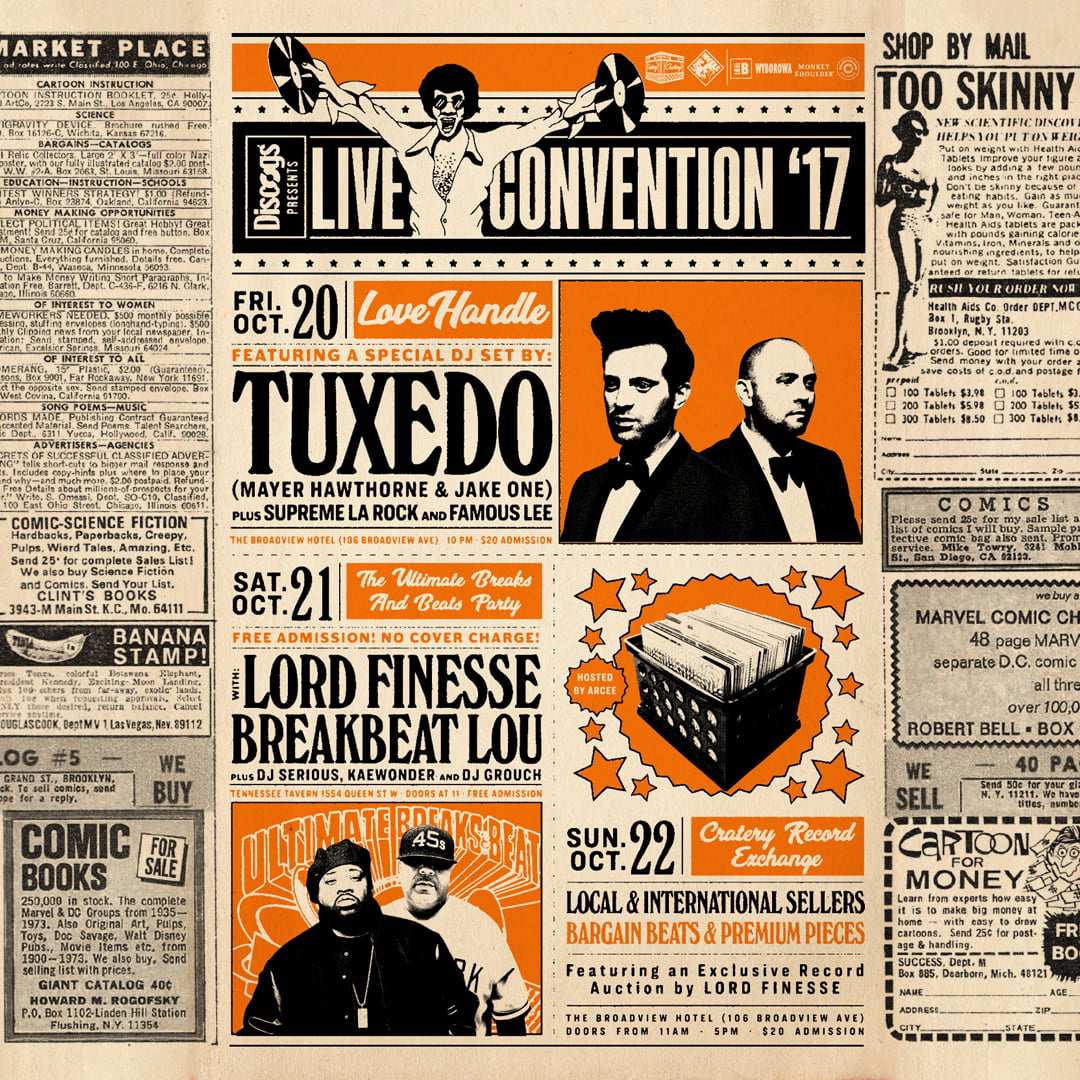 “Live Convention” is a weekend dedicated to celebrating vinyl collecting culture entering its 2nd year presented by Discogs, the world’s biggest vinyl marketplace and database. This year, event co-founders Love Handle and Cratery worked in partnership with the freshly launched Broadview Hotel to make it the home for this year’s convention. Live Convention is quickly becoming a destination for crate diggers all over the world with a weekend of events that cater specifically to the vinyl enthusiast including two parties and an exclusive record show (two of which are happening at the Broadview). This year, Live Convention welcomes DJ’s, sellers and collectors from Tokyo, Los Angeles, New York, Seattle and many more.

Friday October 20, 2017: TUXEDO (DJ SET) Live Convention weekend kicks off with Stones Throw recording artists Tuxedo (Mayer Hawthorne + Jake One) live at the Broadview Hotel DJ-ing their signature blend of 80’s boogie funk. The duo has spent the larger part of 2017 touring the world on the heels of their wildly popular sophomore album, “Tuxedo II”. This time they’ll be spinning the funk classics that inspired their own sound at Toronto’s premier boogie party: Love Handle. Collectively the two have worked with everyone from Jay-Z to Hall and Oates. Look for Seattle’s Supreme La Rock and Love Handle founder Famous Lee to assist on the turntable duties. $20 admission. Doors 10 pm.

Saturday October 21, 2017: ULTIMATE BREAKS AND BEATS (FREE ADMISSION) Live Convention and Discogs is proud to welcome hip-hop legends Lord Finesse and Breakbeat Lou to the Tennessee Tavern (Parkdale) for Toronto’s first official Ultimate Breaks and Beats party. Breakbeat Lou is the co-founder of the highly influential Ultimate Breaks and Beats vinyl series which still continues to influence dj-ing and sampling since its release in the 80’s. Lord Finesse is an NYC rap legend and part of the legendary DITC crew and has worked with everyone from Biggie to Dr. Dre. The two descend upon Toronto armed with an unparalleled record knowledge and some choice boxes of 45s. It’s funk, soul, rock and jazz – all through the eyes of the hip-hop generation. Cratery’s DJ Serious and Kaewonder assist on the turntables. Doors 11 PM.

Sunday October 22, 2017: CRATERY RECORD EXCHANGE Live Convention weekend caps off at the Broadview Hotel with the Cratery Record Exchange, a premium record fair specializing in vinyl handpicked for fans of soul, jazz, progressive, psychedelic and funky sounds from all around the world. Unlike its counterparts, the CRE features not only local sellers, but dealers from around the world with the sort of stock you simply don’t see round these here parts. If that weren’t enough, NYC rap legend Lord Finesse will be auctioning off exclusive pieces from his personal collection live at the show. To top it off, showgoers can expect an exclusive menu from the Broadview. This is a can’t miss show for the rare vinyl collector. $20 admission. 11-6 pm.